QlikView – How to run MDX queries against OLAP Cubes

But with a little creativity you can get it going.

1. First of all I setup an IcCube OLAP In Memory Cube to run the MDX against in the IDE.

Of course you can use your existing SSAS cube(s) as well as a data source, if you have setup an XML/A endpoint config.

I just used IcCube to get a quick testing environment.

2. Next I have used MS SQL as a middleware to grab the OLAP Cube data.

This MS SQL Express (Free) Edition is just there to connect to from the QV client.

3. On the QV client I made an ODBC connection to the MS SQL Express.

Next I run the OPENROWSET Query against the OLAP Cube using XML/A protocol.

As you can see the OPENROWSET command is executed locally on the MS SQL Server.

This makes it super easy to access the CUBE data.

Put in there your MDX Query and go.

4. When finished, reload and and look at the result.

This is realy fun stuff you don’t learn at school

It has an API that can be accessed by any COM compatible client.

And on the other hand it supports the VBScript language for writing Macro’s.

This will get you started.

Open the document again and test it.

See help file to know where you can trigger macro’s. There are several objects to which you can attach Macros

This is a Button example

Now it’s up to your imagination what you are going to automate in QlikView.

We could also call PowerShell scripts if you like.

Windows – Offline Synchronization not available outside of the Domain

Some user forgot the select the Make Offline Available option when he left the office using a VPN connection.

1. Make sure you have connected to the domain using a VPN client.

2. Once Connected right click the folder that you want to sync. And choose Always Available Offline.

But when the option is NOT Available in the shortcut menu.

And the option will come available, that’s it.

Sometimes the solution is right in front of your eyes

I seen many blog on the net about how to migrate the Email AutoComplete list for 2007 to 2010.

I will not repeat that here there’s already enough on the net to find for yourself.

But let’s presume the following. A PC crashes and you got a spare on around. But the user was using OL 2010 and now you handed over to him an OL 2007 ?

And he want to have all his email addresses migrated because does not want to type it all over.

In OL 2010 there is something that is called “Suggested Contacts”

Since the AutoComplete file format changed between the 2 Versions of OL. You just can’t backport it.

OL 2007 and before used a ProfileName.NK2 file

But wait, we could pick up the “Suggested Contacts” and Export them to a PST file and then import them again in OL 2007 as contacts ?

And so on, at the end you will have a PST file with all you Autocomplete E-mail Addresses in it as Contacts.

Now we can IMPORT it again in OL 2007. It’s not quite the same as autocomplete.

But the users can at least find back all his email addresses he did not have before.

2. types a part of the name, or email address

2. Next Press Ctrl + K and it will bring up the list of available email addresses.

You just made a user happy

PowerPivot – Connect to an SSRS Report

SSRS is a very nice reporting platform that comes along with MS SQL.

Using the free Report Builder client you can make some very nice reports and publish or schedule them to run on your intranet.

But what if you want to reuse valuable information in the reports ?

Well we can you use MS PowerPivot to access the data over the internet on you client.

Open PP and choose the in the menu From Report.

Next point to the URL on you Reporting Intranet or SharePoint if you are running in mixed mode. 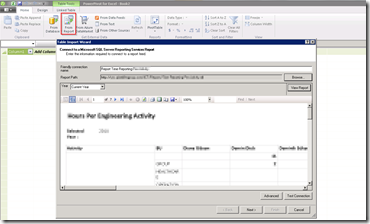 When you click next it will grab the TABLIX data grid in your report.

As easy as that.

This is how the bits and pieces fall together in your MS BI environment.

While there is native way in Report Builder 3.0 to connect to an MS SQL OLAP Cube.

I wan’t to demonstrate an alternative way to connect to ANY kind of OLAP cube that supports XML/A.

For MS SQL you first need to configure your OLAP Analisys Services to be able to connect using XML/A protocol.

Make sure you have the IIS Application Pool settings set to be 32Bit compatible.

Once you have it running you can connect SSRS using the msmdpump.dll

You can use multiple XML/A compatible clients like for example Kettle Spoon.

Where you can enter your MDX query and test it.

Or even PowerPivot as a client to connect.

But back to SSRS, it goes like this. Choose SQL Analysis Server, and point the to the XML/A URL as connection string.

And you can access the Dimensions using regular MDX Queries.

And using Multiple Clients – see above.

It comes also is also is not blocked by the firewall since XML/A uses the HTML (80) or SHTML (443) port.

By default when reporting against a SP List it will use the DEFAULT View.

When you want to access the data using a Specific VIEW you need to add the following to the data source XML :

Create a View and pass Parameters of the View

You need to add –> query –> parameters –> parameter name –> BEFORE the viewfields xml node.

The properties of this view are applicable to the dataset.

Also the sorting will be applicable to that dataset. 🙂